After getting the base of Carelian defence force into paints I assembled a list to pit against the muscovite horde.

With 8 Force points I had:
lieutenant colonel Blankenhagen
his second Captain Smått
3 Hordes of peasants numbering 2 bases each.
6 bases of recruit reiters
4 bases strong Adelsfana
8 bases of provincial musketeers - divided into two squadrons
2 bases of dragoons (Should have been 2 companies, 4 bases.)

Since my opponent brought a force of only 7 FP I had the surpirising task of attacking -
the scenario rolled being defend the crossing:

Round 2? Before the second movement phase. Dragoons have flanked from the right. Musketters continue firing without effect from long range. Reiters have charged the peasants in front of streltsy, scattered them to flight, and themselves retreated in disorder aftergetting shot by and clashing with the streltsy. 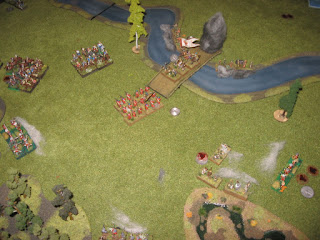 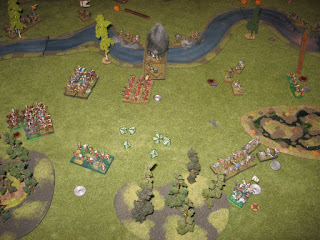 Round 3 Reiters fail to get organized. Adelsfana is rallied after being disorganized by failed charge.
Musketeers advance relentlesly, but despite flanksituation fail to score hits
Boyar sons cross the river and annihilate peasants guarding the crossing. Adelsfana is fleeing after clashing with the streltsy.
The reiters charge streltsy but fail to break their spirit. Musketeers close in for slaughter.

End of round 6 despite appalling casualties streltsy hold the bridgehead. Bridge and ford under Russian control, and with heavy losses to Swede a strategic victory is theirs.

Basically game was lost to me because of too timid approach towards the bridge. Long range musketry was inefficient as it usually is and I failed to get my dragoons to raking position on the side of streltsy.

The quality of raw cavalry in this list is suspect so the enemy should be weakened more before trying charge it.

Then again, wit limited amount of command available, there simply is not too much time for clever maneuvers.

Fun game -  the one unit that achieved its purpose were the peasants guarding my side of the river from boat cossack landings.
Lähettänyt Mikael R. klo 5.36