Bases with rock, marsh, birch forest theme to separate them from earlier batch of Polish peasants.

Adelsfana - the banner of noblemen, or feudal levy: 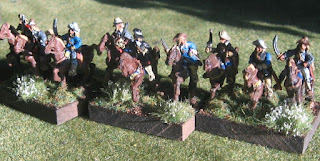 No real uniforms - of suspect quality. Paid men equipped privately by their masters.

Recruit reiters:
Best recruits are already in Poland or Livonia these are those left behind earlier. Unexperienced, too young, too old, some infirm. Equipped with leftovers. May have the fighting spirit, but lack drill, experience and kit.

The colonel:
A mediocre commander who got no troops to lead in the kings war south. Stuck into an inglorious business of repelling muscovites with no real promise of booty or ransoms, threatened by shame if he fails.
Lähettänyt Mikael R. klo 7.22